Just when you thought the holiday season couldnt get anymore amazing, ABC announced they’ll be airing what could be one of the greatest shows EVER, “Lady Gaga and the Muppets’ Holiday Spectacular.” Spectacular sounds like an understatement!

Aside from Gaga and the Muppet clan, the 90-minute special, which is scheduled to air Thanksgiving Day, will feature appearances from Sir Elton John, Joseph Gordon-Levitt and RuPaul.  Oooh, I love her!!!

Apparently she’s like the Queen of Drag but I’m not really sure where that is.I wonder if it’s near Sweden? Bork! Bork! Bork!

Just like me, Gaga is a HUGE fan of the Muppets. Back in 2009 she even took Kermit the Frog as her date to the VMAs. 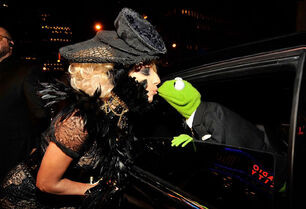 What a cute couple!!! I just feel bad 4 Ms. Piggy. She mustve been really upset. Hopefully they’ll get along during the show, which will feature songs off of Gaga’s soon 2 be released album ARTPOP and hopefully some holiday favorites as well.

With halloween around the corner, 2013 just keeps getting better and better!!!

Who is your favorite Muppet? Let us know in the comments below!