Fans of the VMAs count on several returning faces each year to either dominate across the nominations or have a groundbreaking performance talked about for weeks. One of these faces that was notably absent was none other than Lil’ Wayne. With no VMA nominations whatsoever, Lil’ Wayne went on Twitter to apologize for his lack of nominations at both the MTV VMAs and the BET awards.

Pretty interesting that he says he “noticed” he wasn’t nominated or involved in the VMAs or BET awards. That’s what someone who’s working TOO hard says. Believe me, Idol’s thrown me that line more than a couple of times. He tries to work any harder, and it will kill him like he says. Sheesh! It’s ok to take a break here or there. You don’t see me during the middle of LARPing events continuing to battle even though I’ve been out on the field for 5 hours. No, it’s time for me to have a peanut butter and sandwich break! Knowing when to slow down is just as important as knowing where to work hard.

Seems like Mr. Wayne may be a workaholic. In the wake of this announcement, he released another mixtape in his Dedication series, Dedication 5, freestyle rapping over the latest hot rap tracks. Oh, and did I forget to mention the mixtape is 29 SONGS LONG! Take a breath, Lil’ Wayne!

To be fair, Lil’ Wayne never claimed he was human. So maybe he’s able to pump out ten mixtapes a week, 20 music videos a month, and it isn’t that crazy. I mean he’s been called a goon, goblin, monster, and Uruk hai. Ok, maybe not Uruk hai, but doesn’t he look oddly similar to one. 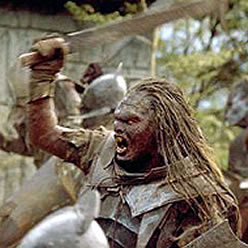 The reaction on Twitter went from mixed to negative, telling him that his music wasn’t good in the first place and that he should just retire. Hmmm, sounds very fishy that they would be following him on Twitter, telling him that he should stop performing, and that they hate his music. People who once loved him now turn him away like……….like me. Sigh. Well, Mr. Wayne, at least we have one thing in common.

Do you think more artists should apologize to their fans whether they’ve disappeared for awhile or released a terrible product? Discuss it in the comments below!