My war on glam metal is actually working! Yesterday mascara and aqua net addicts Mötley Crüe announced that when the band’s next tour is over, they’ll be going on a permanent vacation. Hell yeah!

I’m aware that nearly every other band that claimed they were done ended up reuniting. Hell, I think the Rolling Stones have had at least five farewell tours.

But Mötley Crüe are taking things one step further. Members of the band have signed a legal document prohibiting them from working together after 2015. The American legal system at its finest.

Granted, Mötley Crüe might not have been the worst glam metal offenders. Songs like “Dr. Feelgood” and “Shout Out the Devil” weren’t half bad. But then again, there was this: 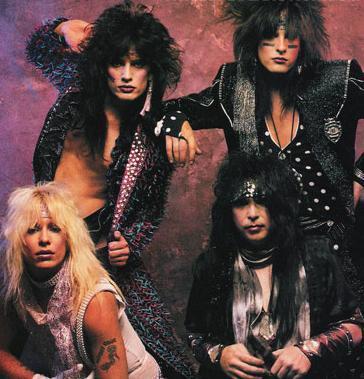 As great as this news is, we still have to endure another year of the Crüe. They’ll hit the road from July to November and will likely return in 2015. Next year will also see the release of their biopic The Dirt based on the band’s autobiography.

There will also be a country music tribute to Mötley Crüe, yet another reason to celebrate their demise.

Will you miss Mötley Crüe? Let us know in the comments below!