According to perezhilton.com, Miss Lizzie McGuire aka Hilary Duff is seriously considering coming back to music saying that she’s been missing touring and connecting with her fans in that way. I’ve been told that I look like an older, darker, taller, un-animated Lizzie McGuire!

THANK GOD! Even though Hilary is currently living out one of my four dream lives, it’s about time that she came back. This is such a coincidence since Dignity started playing through my Spotify last night, even though we all know 4ever Hilary Duff was her best by far, and I was thinking “When is Love it or List it coming on tonight? Is it 8 or 9? Maybe it’s 8 because there might be a recap episode before the actual episode. papasurvey.com . Or maybe it’s 9 and the recap episode was last week?” and then I thought “When is Hilary Duff coming back with another album?” 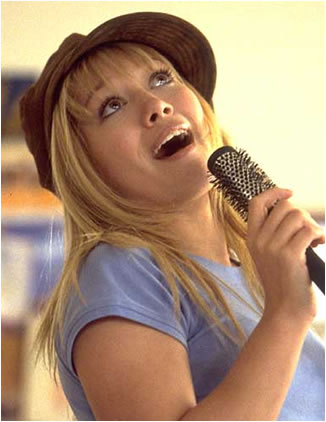 Sing it girl! Right into that hairbrush!

Besides looking FABOLOUS with her dark hair, she’s been busy tending to her vegetable garden and serenading her hunky hockey husband so I’ll forgive her for taking almost 6 years to get to her next album, which is almost enough to forgive her for borrowing my life story for Beauty and the Briefcase. I’m over it……..almost.

What do you think of Hilary Duff’s return to music? Leave your comments below!